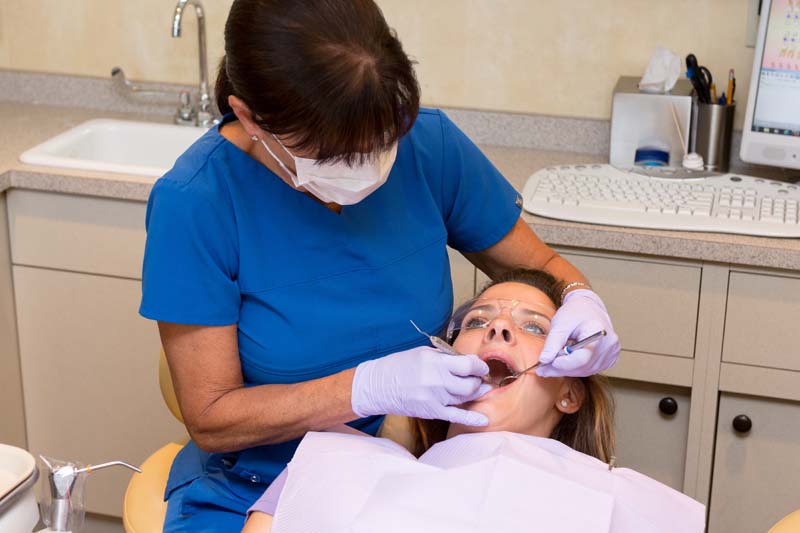 The American Dental Association says that over 75-80% of all adults have or will have some form of gum disease.

Gum disease, more correctly called periodontal disease, is a bacterial infection in the gums and supporting structures of the teeth. It can be divided into several categories.

The first stage is called gingivitis and is characterized by gum tissue that is red, puffy, and bleeds easily when touched with a toothbrush, floss, or dental instrument.

The second, third, and fourth stages are initial, moderate, and advanced "periodontal disease," respectively. These stages are different from gingivitis because the infection has destroyed the bone supporting the teeth, causing eventual tooth loss. At Kneib Dentistry, the treatment is more involved at these stages, usually consisting of a special cleaning with anesthesia and sometimes gum surgery.

Many mothers have experienced gum disease, dental pain, and/or tooth extraction during or shortly after their pregnancy. This is often seen as being a "normal" side effect of being pregnant. However dental disease, which is an infection of the teeth and/or gums, is not "normal" for any patient.

There are three basic events that happen during pregnancy which make the patient more susceptible to dental disease.

Pregnant women are advised to schedule a dental evaluation and receive preventive dental care at Kneib Dentistry. Personalized oral hygiene instruction by Dr. Kneib will be given to fight disease and promote overall good health for the mother and her baby.

Infections in Joint Replacements Can Be Instigated by Severe Gum Disease

Prior to joint replacement, Dr. Kneib strongly recommends a thorough dental examination for the presence of tooth and gum infection.

Periodontal disease is a commonly occurring oral infection of the adult population (80% of adults are affected) destroying the bony support of the teeth. This infection slowly progresses over the lifetime of the patient and is often manifested in the advanced stage in the senior population.

Because of the lack of any discomfort to the patient until the total loss of bony support to the teeth, many adults are unaware that they have this infection. However, the bacteria from this bone destroying disease, especially in the more advanced cases, have been attributed to possible infection of joint replacements.

Candidates for joint replacements who have not been seen by Dr. Kneib in over a year should consider a thorough dental evaluation of their teeth and gums before surgery.

Depending on the severity of the infection, treatment of gum infections and tooth abscesses may take from two weeks to two months before the patient reaches adequate health before surgery.

Periodontal disease can go on for years without pain and without detection unless specific examination procedures are performed.

Visual oral examination by itself (even by a dentist) will not reliably detect periodontal disease until it has reached an advanced stage.

Early detection and adequate diagnosis require measurement of pockets (the crevice between the tooth and gum) with a periodontal probe. At Kneib Dentistry, effective prevention and treatment is available, but the damage caused as the disease progresses is irreversible.

Early detection is critical to prevent tooth loss and disfigurement. Although the procedure is simple and requires only a few minutes, millions of American adults have never had it done.

Some signs of periodontal disease are:

Some Dental Problems are Easy to See—Plaque!

One of the easiest problems to spot is a build-up of plaque. Plaque is the soft, sticky layer of bacteria, which is constantly forming on the teeth.

Usually, it is invisible to the naked eye, but when a person is not brushing adequately, it can build up to where it appears to be a thick whitish coating on the teeth at the gum line. If not removed, it can lead to gum disease.

Another potential problem, which is easy to spot, is missing teeth. Many patients assume that if they are still able to eat, they are OK.

But very often, losing just one tooth can lead to the loss of support, and teeth begin to drift into the empty space, causing a change in the bite. It also forces the remaining teeth to carry an additional load, sometimes past their ability to adapt. In most cases, when even one tooth is lost, the remaining teeth suffer and are more likely to be lost as well.

Prevention is an overused word in our vocabulary, but we all know it works. You see it in what you do every day. Who wouldn't rather prevent a crisis than manage one?

Awareness of gum and underlying bone disease is very low. Only 50% of the population visits a dentist on a regular basis. Of that 50%, 80% have some degree of gum and bone disease. It is an epidemic. Were this any other disease, we would be calling on the CDC for immediate action!

Gingivitis is the most common periodontal disease, affecting 90% of the population, including our local Erie area community. It is an infection of the gums caused by bacteria that form plaque.

In small amounts (when it is newly formed), plaque is invisible and relatively harmless. But when left to accumulate, it increases in volume and the proportion of harmful bacteria grows.

These bacteria release toxins that result in inflammation of the gum tissue. Eventually, the plaque hardens and forms hard deposits called calculus or tartar.

How do I know if I have gum disease?

The first sign of gum disease is symptoms. If you are experiencing bleeding or receding gums, swelling, foul odors, or mobility of teeth, you should book an appointment with your dentist because these are all signs of gum disease. Our team can determine with certainty the condition of your teeth and whether the issues you are experiencing are related to gum disease or another periodontal issue. We can take X-rays to determine bone loss and density if it looks like the damage is severe. From there, we can discuss appropriate treatment options based on your condition.

What are the best ways to prevent gum disease?

The best way to prevent gum disease is to brush your teeth after consuming acidic foods, drinks, and after every meal. At the very least, you should be brushing your teeth twice a day, using mouthwash and flossing. Getting regular dental cleanings and exams will not only help prevent disease, but monitor the health of your teeth so that you can make informed decisions regarding your lifestyle and care.

What are the treatment options for gingivitis?

Kneib Dentistry can provide cleaning treatments for both acute and severe cases of gingivitis. However, you can continue to treat more acute cases of gingivitis at home with remedies such as saltwater rinses, oil pulling with coconut oil, or purchasing a mouthwash specially formulated for sensitive teeth and treating gingivitis. You may also want to consider purchasing a soft-bristled toothbrush and a toothpaste meant to clean and strengthen sensitive teeth. For more chronic stages of gingivitis, we can provide treatments and regimens during your cleaning appointments.

When is surgery necessary for treatment?

Advanced stage periodontitis is typically when surgical intervention is required to remove damaged teeth or tissue. This happens after the gum line begins to recede, and severe tooth pain and foul odors occur. We utilize laser technology to perform surgeries requiring tissue removal, which can help speed up cleaning times.

How do I take care of my teeth after gum surgery?

Be sure to follow the care and after-treatment guidelines set by our dental care team. In general, it is a good idea to reduce consumption of sugary or acidic food and drink. For more information, review our page on oral surgeries, which includes a FAQ section.